Big Hearts Community Trust, the foundation of Heart of Midlothian, has won the More than Football Award 2021 powered by Musco Lighting for their project ‘The Big Hearts Supporters’ Movement’. The winner was announced during a gala ceremony in the Big Church of Breda, one of the venues of the 16th EFDN Conference. The initiative of Big Hearts received the most votes of the EFDN Members. The goal of the More than Football Award is to honour the best social initiatives in Europe delivered by a European Club, League or FA. 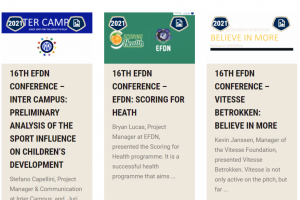