Former France and Manchester United striker Louis Saha will present the More Than Football Award at the 14th EFDN Conference which will be held online. The goal of the award powered by Musco Lighting is to honour the best social initiatives in Europe delivered by a European Club, League or FA by celebrating the work they do on and off-pitch on a local, national and international level.

Saha will present the award to one of five projects from the shortlist announced by EFDN this week. The five – Borussia Dortmund, Club Brugge, Legia Warsaw, Malmö FF and Pro League were selected for the 2020 More than Football Award shortlist. The award honours the best community and social responsibility (CSR) initiative in European football. The shortlisted applicants selected will present a 15-minute presentation at the upcoming 14th EFDN “#Morethanfootball” Conference. EFDN members will vote on the five shortlisted projects on 9 November. Louis Saha will announce the winner on 11 November.

REGISTRATION FOR THE EFDN CONFERENCE

Louis Saha is a former professional footballer who played as a striker for teams including Newcastle United, Fulham, Manchester United, Everton, Spurs and Lazio. He also represented France, playing in both UEFA Euro 2004 and the FIFA World Cup in 2006. At Manchester United he won the Premier League twice, the UEFA Champions League and the League Cup.

Since hanging up his boots, Louis has moved into the world of business where he has used his experience to develop propositions to support athletes and other people in the public eye, in their careers.

The winner of the More than Football Award powered by Musco Lighting will not only receive recognition for having implemented the most innovative and impactful Community and Social Responsibility programme in European football, but they will also win a complete Mini-Pitch System™ modular sports solution. The club-branded mini-pitch will be developed in partnership among the winning organisation, EFDN and Musco Lighting. 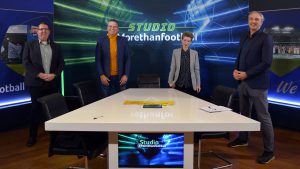 Save the Date! 15th EFDN Conference to be held online

We use cookies to ensure that we give you the best experience on our website. If you continue to use this site we will assume that you are happy with it.OkPrivacy policy