EFDN will organise its 13th EFDN ‘CSR in Football’ Conference on 19th and 20th of November 2019 at FC Barcelona’s iconic home of the Camp Nou. We will celebrate the 5 year anniversary of EFDN and the 25 year anniversary of the Barça Foundation. You can register > here < to join us in Barcelona!

The 13th EFDN Conference is open for representatives working in the football industry and will be a gathering of more than 200 representatives of European and global football clubs, leagues, national football associations, governing bodies and other stakeholders. Leading practitioners from across Europe come together to discuss, debate and learn about new trends and challenges. ‘CSR in European Football’ covers the whole spectrum of CSR related issues in football including topics such as environmental sustainability, stadium accessibility, anti-racism and discrimination, fundraising and partnerships and various community outreach programmes. A networking dinner allows attendees to get together and meet in a more casual setting.

EFDN Members have access to free passes as per their membership package and can claim them by completing the Registration Form.  Additional passes are available to EFDN Members for €175 per additional person.

Non-EFDN members can purchase Full Delegate passes, with access to both days, for € 375 per person. Alternatively, one-day Delegate Passes are available for 19th November (€250) or 20th November (€200). 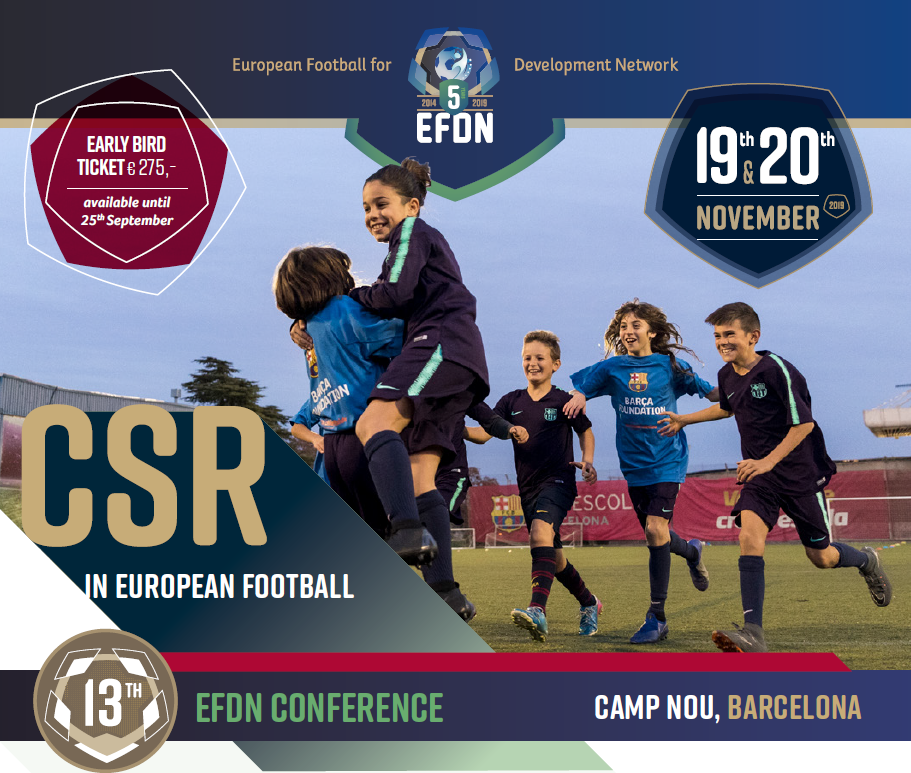 The 13th EFDN Conference in Barcelona also sees the launch of the More than Football Awards which will be handed out for the best CSR initiatives and projects in football throughout the year. See the initial longlist for the 1st edition here.